A talented youngster in Market Harborough has won a competition to design a home of the future - becoming our East Midlands ‘archi-tot’.

We are currently building houses at Saxon Meadows on Angell Drive, launched a competition to find imaginative, creative ‘archi-tots’ at St Joseph’s Catholic Voluntary Academy, asking them to design their perfect home. 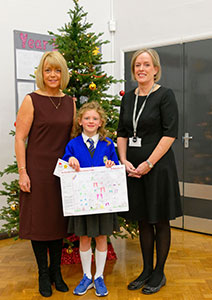 Seven-year-old Ailish, created a colourful house which encouraged wildlife to flourish, with features including a bat hotel, a hedgehog home and even a fairy garden. She also included a separate house next door for homeless people to live in, complete with its own roof garden.

Other creations that made the shortlist were seven-year-old Sophia’s house that was also a planet and fuelled by non-pollutant, bubblegum-scented fuel; five-year-old Jesse whose house had a waterslide and room made out of cushions for playfighting and nine-year-old Florence Tanner’s house which floats on water and is powered by vacuuming up rubbish from the ocean.

As our East Midlands’ new ‘Archi-tot’, Ailish has been awarded a prize of £100, and with the twelve other shortlisted children receiving a £10 prize, to spend on art supplies to further inspire their creativity and imagination.

Mary Timlin, sales director for our East Midlands division, said: “We’re passionate about inspiring the next generation, and our competition aimed to encourage young people to take an interest in design, as well as the environment and communities we live in. We were delighted to name Ailish the winner – while we had lots of entries hers really stood out.

“At Redrow Homes East Midlands we strive to be at the forefront of design and innovation, and are committed to building responsibly – and we were so impressed with Ailish’s creativity and values that she just had to be the winner!”

Karen McVea Headteacher at St Joseph’s Catholic Voluntary Academy, said: “I’m thrilled that our pupils took part in this initiative. Everyone really put their all into the entries, and the imagination and creativity was clear to see in the designs. I’m very proud of the pupils – and congratulations to Ailish whose design was thoughtful, creative and colourful.”

Showhomes are now open at Saxon Meadows, and visitors can take a look around the three-bedroom Leamington and the four-bedroom Shaftesbury and see exactly what life could be like at this popular development.

Market Harborough was named by the Sunday Times as one of the ten best places to live in the Midlands in 2018. Saxon Meadows benefits from great schools and fantastic transport links, including direct trains to St Pancras London in just one hour, and easy access to the A14, A6, M1 and M6.

To find out more about homes at Saxon Meadows, please call 01858 589501 or visit: redrow.co.uk/developments/saxon-meadows-market-harborough