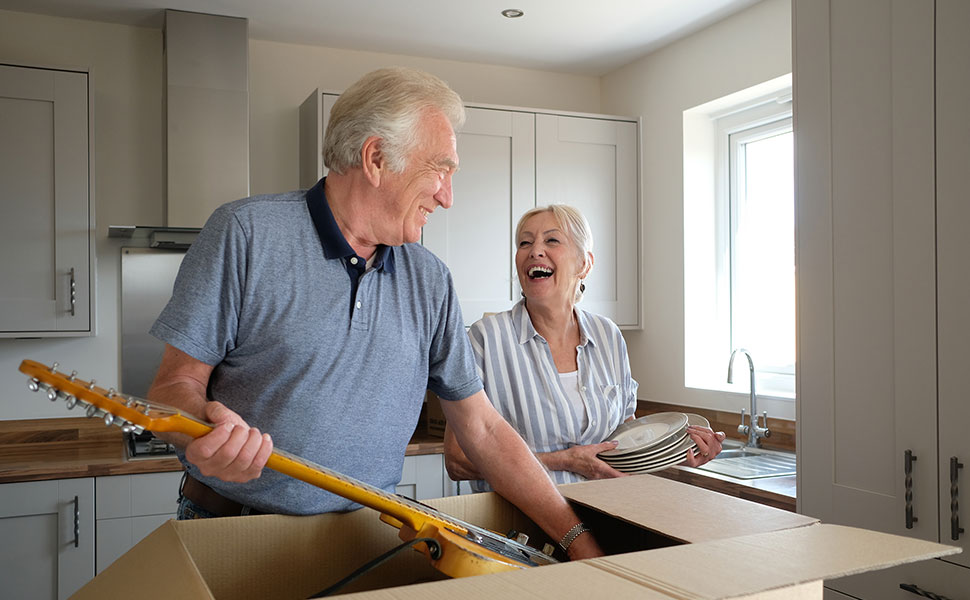 I’ve always found that the real pain of moving isn’t the big stuff, like sofas and beds. It’s packing up all the little objects that make a house a home. Some of which are precious, some of which, frankly, aren’t. But all require sorting nonetheless.

These days I take the view that if I haven’t worn it, used it or looked at it for 6 months, then I either donate it to charity, recycle it or bin it, and it’s an approach I highly recommend. Of course, some people may need to resort to short or long-term storage for some items, for example if you’re downsizing but need to get moved in before you can work out what you want to keep and what you might need to part with.

But either way, this is one of those jobs that does take a bit of time and prior organisation. It’s as much about getting into the right mindset as it is about getting stuck in practically.

What I’d also suggest is that it’s a lot easier to do a bit at a time over a two or three month period. It’s much less daunting and you’re more likely to be more efficient if you do it in small doses. It also avoids that fear of throwing out something important by mistake whilst you’re in a rush if you try to tackle it all quickly over a couple of weekends.

The other benefit to starting the sorting and clearing out process at least a couple of months before you move is that you’ll give yourself ample time, not just to work through what you’re keeping, donating to charity, recycling or putting into long term storage, but then also to actually finish the process by taking said items to the charity shop/recycling centre/storage facility. Otherwise, you’re liable to end up with a stack of boxes and bin bags filled with stuff bound for somewhere other than your new home which somehow find their way into the removal van, then into your new garage/spare bedroom/shed whence they will reside until you move house again. Which isn’t really what we’re looking to achieve.

Of course, it is hard to part with sentimental items, such as paintings that the kids have drawn or cardboard creations they’ve made that you’ve kept because you can’t bear to throw them out. But for those things that you don’t want to necessarily keep, but don’t really want to part with either, you could always take a photo. If you have a lot of items which fall into this category, once you’ve taken your pics, you could always upload the images and create a book using something like PhotoBox, to create a lasting memento which is much more portable – and takes up a lot less room!