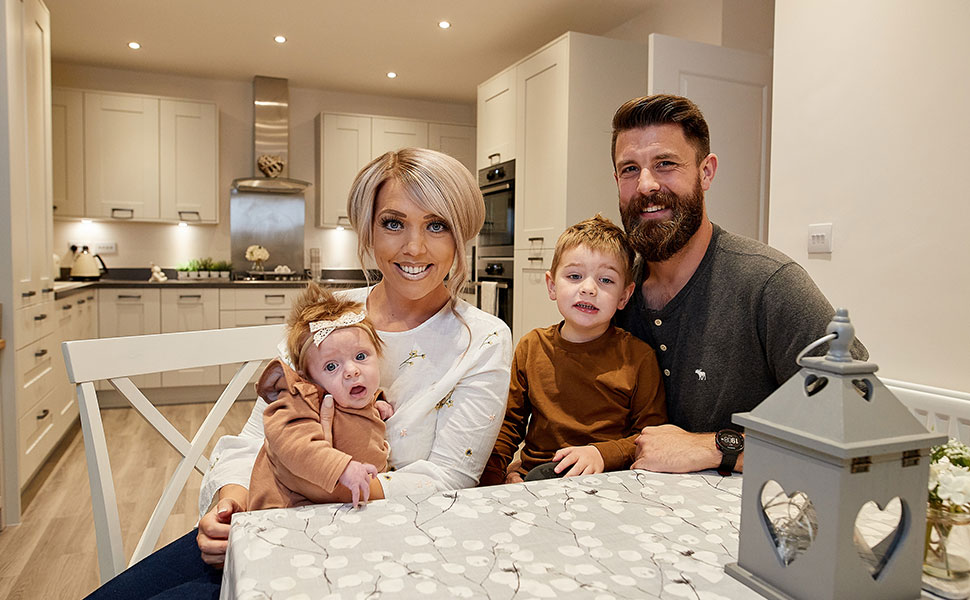 Buying a house is an exciting time for anyone but for Preston mum-of-two Kym, the anticipation of seeing her brand new home resulted in her going into labour.

Kym, 36, and her husband Chris, 31, saved for two years to move into their first home as a married couple and, when Kym found out she was expecting their second child, the need for a larger home was even greater.

“We found our dream home at Tabley Green in Fulwood back in February, when I was in the early stages of my pregnancy, so it felt like perfect timing,” said Kym.

“We went to visit the house in July, a few weeks before we were due to move in and seeing it ready and waiting for us filled me with so much excitement that 30 minutes after we left our appointment I went into labour!”

Baby Emmy, big brother Harry, Kym and Chris are now settled in and enjoying the space their new home gives them. They are now within walking distance of Kym’s parents meaning they have been able to spend more time together as a family.

“Moving to a new house in the middle of a pandemic, with a two-week-old baby and a toddler was manic. We had to take each day as it came but we are both very grateful that it all worked out so well.

“Redrow’s sales team at Tabley Green, Louise and Richard, were fantastic during the whole process, and James, Lee and all the site team have been great with the after care. Nothing was too much for them and they made our journey a really pleasant one despite the circumstances.”

The couple used our Help to Sell scheme to sell their previous home back in February and within two days of it being put on the market they had an offer for the full asking price.

Kym adds: “Using the Help to Sell scheme saved us trawling the high street and wondering which estate agents to use, it really did take the stress of selling our old home away so we could focus on our new one.”

For more information about homes at Tabley Green make an appointment to visit the Lightfoot Lane show homes and sales office, open daily from 10am to 5.30pm; call 01772 507449, or go to www.redrow.co.uk/tableygreen