Junior run off to a great start 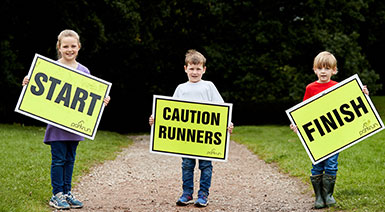 Worden Park junior parkrun has received a donation from Redrow that means they are ready for the off.

Launched on February 16 this year, Worden Park junior parkrun is a two kilometre timed running event which usually takes place every Sunday at 9am for children aged four to 14 years, in Worden Park, Leyland. parkrun is currently closed due to Covid-19.

This local event is part of the wider parkrun initiative which currently has more than 600 locations in the UK and offers the five-kilometre events for adults and junior parkrun events (of which there are more than 100). Worden Park junior parkrun’s core volunteer team is made up from members of three local running clubs, coaches from two junior running clubs and members of the local community.

Katy Cleece, event director, first ran at her local parkrun in 2016 after taking up running to get fit and she was cheered along by her children and dad. In 2017 her then five-year-old daughter started running with her and Katy took her to the nearest junior parkrun at Avenham Park.

Katy says: “In 2019 our local parkrun had raised enough money to launch a new parkrun in Leyland, where we live. By that time both my children were regularly running, and I was pregnant with my 3rd child. I had run 65 parkruns at 21 different locations and had also volunteered 50 times. I was definitely in love with parkrun and decided to step up as event director of Worden Park junior parkrun.

“The local community raised £3000 for the initial set up costs, which provided us with the basic parkrun kit and South Ribble Borough Council (SRBC) have further supported us by purchasing a defibrillator for the event. With Redrow’s donation we can now purchase a laptop where we will process the participant’s finish times, send emails to volunteers including future volunteer rosters and it will also be used to promote the event on social media.”

Junior parkrun is not a race, but a timed run where the emphasis is on taking part and promoting physical fitness plus emotional and mental wellbeing.

Katy adds: “The event also rewards volunteers with t-shirts after they’ve volunteered at 25 separate events. Children are awarded wristbands after they have completed 11, 21 and 50 runs plus a certificate, and a further certificate is given for 100 runs.”

parkrun began in 2004 with some friends meeting in a local park each week. It is now a global brand with new events setting up frequently and branching out into new countries. It gives communities the opportunity to connect, to go out into their local park and meet other people, forming new friendships.

Worden Park junior parkrun takes place near the model trains and miniature golf area, through to the formal gardens, showcasing areas of the park and its’ facilities.
Sian Pitt, sales director at our Lancashire division said: “This is a fantastic project that will get children outside and away from iPads and screens as well as boosting their confidence and help them to make new friendships. We are really pleased that we could support them in their final steps to launch.”

Worden Park junior parkrun is one of twelve groups and good causes that have shared £5000 from our Leyland community fund. These funds are set up to provide support to communities close to where they build.