'Hat-trick' celebration for site manager at our Lancashire awards

There was a triple treat for site manager Alan Purdy at our Lancashire Employee Awards presentation.

The 69-year-old from Formby won Site Manager of the Year, and his site, Sanderling Park, in Formby, won Health and Safety Team of the Year – and it all happened on his birthday.

“It was crazy, I couldn’t believe it,” said Alan. “It felt surreal, but it was great to have so many reasons to celebrate. But I would add that both of the awards belong to the team, not just me – you’re only ever as good as the people you work with and I have a great team and I’m really proud of them.”

Our Lancashire division held the Employee Awards presentation virtually on Zoom because of Covid-19 restrictions, with around 120 people across all its departments attending.

Father-of-two Alan has worked in different roles for 16 years and has previously received two NHBC Pride in the Job Quality Awards.

Development of the Year – Paul Aaron and Rachel Allred were both given Peer Awards, having earned the praise and respect of colleagues who voted for them.

Rachel, 30, a customer service manager from Bolton, has worked for the company for two and a half years, having been promoted to her new role from that of co-ordinator just before lockdown hit. 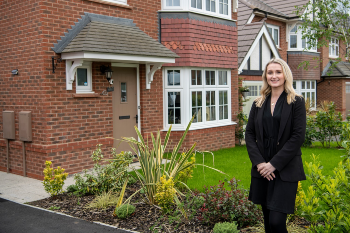 “That made the job more difficult,” she admitted, “because there were so many issues that had arisen because of Covid through the whole buying journey that weren’t there before and having to manage customers’ expectations.”

Being a good team member, showing willing and always giving 100% were some of the comments made by her colleagues and Rachel said: “I’m over the moon, I’m really happy to have won. It’s such a nice feeling that the people you enjoy working with and who you respect, are noticing you and your hard work too.”

Area construction manager Paul has been working with us for 24 years.

The 54-year-old father-of-two, from Ashton-in-Makerfield, says he always tries to motivate people and get the best out of them, encouraging mutual respect.

“It’s been harder to get the messages across over the last year with less interaction, so to win a Peer Award in such a difficult year makes it even more rewarding. People are acknowledging what you’re doing and it’s pleasing to know that.”

Lancashire’s managing director Claire Jarvis, who was part of the virtual awards, gave credit to all the winners who she said had risen to the top in a very difficult 12 months.

“They have maintained a professionalism and dedication throughout, and worked harder than ever to achieve the high-quality of homes and customer service for which Redrow is renowned.

“We are delighted and proud that they have shown such loyalty and commitment and demonstrated the teamwork and focus that keeps Redrow at the very top of the housebuilding industry.”

To find out where we’re building in Lancashire visit www.redrow.co.uk/Lancashire