Dean Stanbank feared it was an April Fool’s joke when he was told he’d been promoted on the first day of last month.

But the step up to site manager was a genuine reward for the hardworking team member who had been awarded Assistant Site Manager of the Year only the day before at our Lancashire division’s awards evening.

Dean, 33, from Bolton, said: “I wasn’t sure whether it was a wind-up because it was April 1st, but I checked the clock and realised it was after noon, so it was real!

“It wasn’t something I was expecting, certainly not so soon, but I was made up.

“Like the award, which I hadn’t even realised existed, it was a recognition of my hard work and that it’s appreciated by Redrow. I believe I work for the best and in the Lancashire division I feel that I’m part of ‘the family’ and that’s great.”

Our team awards are held annually to honour the efforts and commitment of each division of the company across the UK.

Acknowledging Dean as Assistant Site Manager of the Year, Lancashire construction director Keith Collard praised his ‘great attitude’. Keen to learn and improve in all aspects of the role, Keith added: “He will help out with anything and for anyone.”

It was an accolade which demonstrated a great start for Dean who has only been with us for two years, joining the company in March 2020. 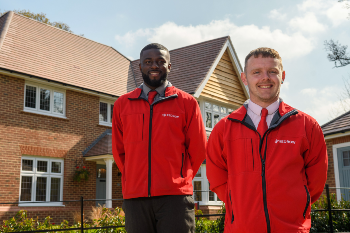 Dean had worked for other developers, specialising in tiling conservatory roofs, a trade he had been perfecting for 10 years previously. He began studying for an HNC in construction management at 27 which, he says, helped him go forward into the assistant site manager role.

Dean had worked at Saddleworth View in Oldham and Oakwood Fields in Lowton before starting work on Sycamore Manor in Whittle-le-Woods in Chorley where he is now.

Among other things, as assistant site manager and now site manager, his role is to ensure build targets are met, liaise with sub-contractors and suppliers, ensure health and safety on site, and deal with customers.

“It’s a huge responsibility and it can be daunting,” said Dean, who has a 10-year-old son Aspen, “but it’s a challenge too, and I enjoy that.

“It is a job, but you’re not just building houses, you’re building someone’s home and future - and remembering that is the important thing. I would want the best house for me, so I want to provide that for our customers.

“That’s why I came to Redrow in the first place, because of their reputation, and why I’d like to go further with them.”

Site Manager of the Year of the Year was awarded to Rob Jones, who is ‘first on site, and last to leave’, is ‘totally committed to the job’ and ‘driven to meet programmes and deadlines’.

Rob, 28, from Manchester, has been with us for more than 10 years, starting as an apprentice bricklayer and learning his trade before moving on to the management ladder.

He has worked on several sites, most recently Tabley Green in Fulwood and Fox Meadows in Chadderton, before taking the lead role at Oak Leigh Gardens in Barrow 18 months ago. 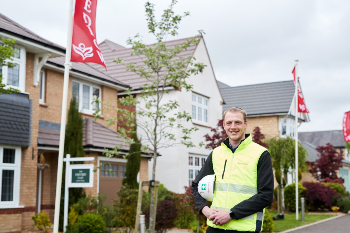 Father of twin 15-month-old girls Alexandria and Charlotte, Rob, who has been a site manager for three years, said: “Winning the award made me really happy; it’s nice to hear those words and see the appreciation that comes from them for the hard work I put in.

“I am driven by awards because of the acknowledgement they bring, from the bosses to the lads on site and the customers.

“Ultimately, my job as site manager is to see the product built, to see it come to life, and to drive the quality throughout. It’s both a challenge and an achievement, but if you are going to do something, I have always been taught to do it properly and put everything into it. Nothing can beat seeing a customer so happy when they move in to their new home.

“Keith Collard started as a labourer and that shows how far you can go with Redrow and why I joined them, knowing their reputation and why they are above other builders.  I’d like to progress to area contracts manager and to go as far as I can.”

There was an individual recognition award for Obi Ebizie, assistant site manager at Worden Gardens in Leyland.

Obi, 26, from Chadderton, joined us in 2019 on our graduate training scheme after completing a construction management degree at Nottingham Trent University.

He was singled out for a Health & Safety and Environmental Award for his ‘exceptional understanding of our HS&E standards throughout the year’.

Jyssica Murphy, Divisional Heath, Safety & Environmental Manager, said: “He is proactive and positive in managing HS&E on site and he ensures it is at the heart of his day-to-day activities. He leads by example, takes ownership, and is keen to get involved during HS&E assurance inspection visits.”

While shocked, Obi said he felt very honoured to win the award and to be recognised, adding that it was a great start to his role with the company and motivated him more than ever.

And Obi, who has worked at four sites, including Pride in the Job winning The Oaks in Warrington, said his efforts came down to one primary focus: “The most important thing for me on site is that people come to work in the morning and go home to their families at the end of the day.

“The last thing I want is for anyone to go home injured or to have an accident on site. Of course I want to push for houses to be completed, but I also want people to be and feel safe, not uncomfortable; and to do that I need to make sure that people stick to guidelines, that they follow the rules, that they wear their PPE.

“I lead by example because if I’m not adhering to the rules, how can I expect anyone else to?”

Obi said there were so many aspects to his job, from organising trades to overseeing progress meetings and production planning: “That’s why I’m really enjoying it,” he added.

“I really appreciate all the support I have been getting from everyone, which helps me to learn, progress and develop myself, and I love building relationships with the customers too.”

Keith Collard said: “For all that these are annual awards, they lose no importance as each year goes by.  Every single year they are a tribute to the exceptional standards that people like Rob, Dean and Obi have shown each time they turn up to work.

“We are delighted to present them with the awards, well-earned for the commitment and 100% efforts they show, and, above all, to thank them for their loyalty to the company and our customers.”

For information about careers with us go to www.redrowcareers.co.uk