It’s not often a house is bought without viewing it first, but the Maule family had so much confidence in us, that’s exactly what they did.

Whilst looking to relocate to Northwich, Andy and Danniella, made a ‘chance visit’ to our award winning Hartford Grange development, in the nearby village Hartford.

Andy, 42 said: “My wife and I are from Altrincham, about 16 miles from here. My brother-in-law moved to Northwich about six years ago, so we’ve been visiting the area for a while.

“We have two daughters, five-year-old Olivia and Georgia, who’s seven, we wanted them to be able to play outside on their bikes in a safe environment and live somewhere a bit more family orientated.”

The couple, who both work in Manchester, also wanted an easy commute. Bing less than 30 miles from the city, Hartford soon became a new area of interest.

“We called in to Hartford Grange’s sales office on the off-chance after being outbid on another property. The staff were super helpful, but unfortunately there were no houses available for sale at that present time, so we left our details and travelled home,” said Andy.

“Four hours later a Redrow employee called to say someone couldn’t proceed with their reservation, so a house was back on the market.

“Even though we hadn’t viewed the house, we didn’t know anything about the house style, and we didn’t know where it was positioned on the development, we took a leap of faith and immediately said ‘yes’.”

The property was, in fact, a five-bedroom detached Marlborough and, despite not viewing it, having previously owned one of our homes for 15 years the couple knew they were in safe hands.

It was a case of being in the ‘right place at the right time’, they felt. 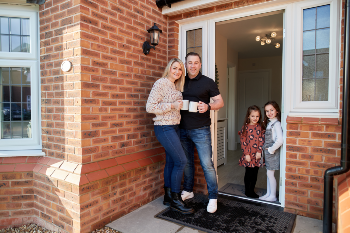 “As previous Redrow homeowners we knew their build-quality was good and that if we had any problems with the house, they would be sorted; that’s the beauty of buying a new build,” said Andy.

“I always look to purchase new, because you spend so much more money in the long term on a second-hand house and inherit any problems it might have. Even if surveys are carried out, they don’t uncover everything.

“New-build homes are covered by a warranty and any problems get fixed. You also don’t have any big maintenance bills or unforeseen expenses, so you can budget more easily.”

The family love their Marlborough, a Heritage Collection property that boasts an open plan kitchen/diner with adjoining utility room, a lounge and a ‘snug’, plus a cloakroom and integral double garage. Upstairs there are five bedrooms, two en-suites and a family bathroom.

“The house has a separate snug area, which the kids always use, so when we have people around, we sit in the kitchen and the children sit in the snug, they shut the door and have their own space,” said Andy.

“We also gained an extra bedroom, which is great as I work shifts so it means I can sleep in the spare room and use the en-suite and not have to wake the whole house. It’s also great as a guest room, as we have family staying over frequently.

“My favourite rooms are the living room and the kitchen, both are a good size, and we’ve got a large bay window in the lounge. The kitchen is the real hub of the house, where we all come together for meals, it’s a place to chat.”

Hartford Grange is now fully sold but we have two other developments locally, both featuring Arts & Crafts inspired Heritage Collection homes. Weaver Park and Water’s Reach sit side-by-side and homes currently available include a three-bedroom detached Warwick, priced from £339,995, and The Welwyn, priced from £484,995.

Fully furnished show homes can be viewed at Weaver Park; to make an appointment call 01606 369800 or visit www.redrow.co.uk/weaverpark.