Freelancer Holly , 28, has bought her first home, a two-bedroom apartment, at Redrow's The Loftings development in central Maidenhead with her older sister. Holly's job, which sees her making 3D models for blockbuster films at Pinewood Studios, is her dream occupation, but contract workers often face more difficulties accessing mortgage finance when compared to their permanently employed peers.

Holly's older sister, who continues to work and rent in London, decided to lend a hand and make a sound investment by buying with her sister, whilst maintaining her lifestyle in the City for now.

Holly explains: "I went to see the show apartment last year and loved the modern, spacious layout and the fact I would have my own balcony, as well as access to a smart communal garden. Rickety barn conversions and drafty old houses aren't for me and I could see I'd be getting a home I could move straight into, with excellent insulation and sound proofing from my neighbours. I drive to work at Pinewood studios about half an hour away, so my allocated parking space is such a helpful feature. The most unusual thing I’ve ever had to make is a six-foot pipe-cleaner emu for an art exhibition – as you can imagine this isn’t the sort of work you can take home – so commutability continues to be so important to me. The Loftings is also a short work from the station, so I have access to great public transport links too.

“My sister isn't quite ready to stop renting in London yet, but has a well-paid job and good savings, so decided to buy this apartment jointly with me, and has contributed to the deposit and will contribute to the monthly mortgage repayments. Our lender was therefore able to consider her income when assessing our application. It’s a win-win for us. I now have somewhere secure to live which is my own, and will no longer be paying rent on a home that isn't mine. At the same time, my sister has made a smart bricks and mortar investment whilst, in effect, lending me a hand. And, of course, she has first dibs on the spare bedroom if she wants to get away from London!"

As well as buying as a sibling team, the Martin sisters have also used the Help to Buy equity loan scheme which allowed them to purchase with just a 5% deposit, and a 20% loan from the Government, which Holly describes as "vital" to them being able to take this step. The latest stamp duty holiday, announced in July 2020 by the Government, also meant there was no stamp duty to pay at all on the £350,000 two-bedroom apartment, and the savings have gone toward an upgrade to the work surfaces in the kitchen. This was an option Holly selected through Redrow's online MyRedrow customer platform, which allows buyers to personalise their home by selecting a range of optional extras and upgrades. 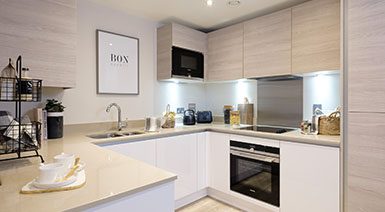 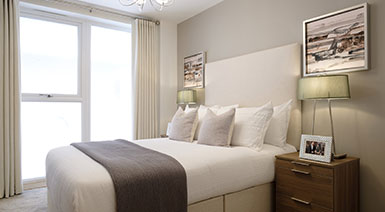 We invite customers to view their home in person during the build process, which gives buyers a further taste of what to expect.

Holly explains: “I brought my current flatmate with me on the Hard Hat tour. She was so taken with The Loftings and the quality of the homes, that she has since purchased a Redrow home herself in nearby Bracknell at Osborne Gate. The customer service throughout this process has been of a very high standard, with any questions I had answered quickly.”

Holly moved into the new apartment at the end of September and will be decorating and furnishing it in collaboration with her sister.

Holly said: “Lockdown was a tough time. The film industry ground to a halt which meant I had no work for several months, although thankfully I was able to benefit from Government support. This is such a positive, fresh start for me.

“You should be able to rope family into helping with the decorating at the best of times, but given my sister owns the property with me, it’s pretty much an obligation! We’re both really excited to tailor it to our tastes and I’ve already selected a range of bamboo furniture and a quirky green velvet corner sofa for the lounge – and of course I’ll be bringing the outdoors in with lots of house plants.”

There are just two two-bedroom apartments remaining at The Loftings, both for £374,950.