Customers at our new Tabley Park development are in safe hands with not one, but two, award-winning members on our top team.

Jake Green has just been named our North West division’s Site Manager of the Year and Melanie Ferris as Sales Consultant of the Year, making it a double victory at the Northwich Road homes collection.

It means anyone purchasing a home at Tabley Park can do so with total confidence.

“Melanie and I work well together because we both want what’s best for the customer - and she keeps me on my toes!” said Jake.

“It means customers are guaranteed a house that’s the highest standard it can be, and they can be assured of the best customer service from start to finish.”

Celebrated internally every year, the awards recognise those who have excelled in their roles in each of our 14 divisions.

Jake, 27, from Oldham, has been with us for five years, after starting on our graduate scheme in 2017. 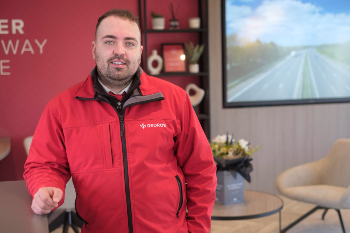 And it was clear from the beginning that the father-of-two was heading for success when he was taken off what should have been a two-year training programme and promoted after just 11 months.

“We have 10 homes occupied now, so it’s going well.

“It is hard work and a challenge being a site manager, and you need to be able to deal with pressure, but I think I’ve got an old head on young shoulders. I love the job because it’s lively and it is different every day,” he added.

Jake was presented with the award for a striking performance record and a well-kept site, as well as good health and safety figures, customer service returns and external audits.

Melanie, 52, from Manchester, has worked with us for 23 years, after previous jobs in sales and working as a dental nurse.

“I love our properties and I think we have the best product out there, so I couldn’t work for anyone else other than Redrow,” said Melanie. 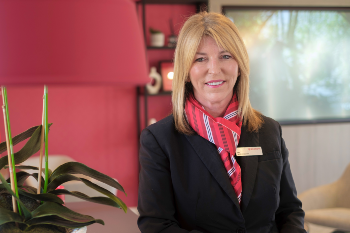 “Buying a house is a huge commitment and, as a sales consultant, you go on a journey with people, whether they’re downsizing, getting on the property ladder or relocating; and when they come to a development, they don’t know anybody so you play an important role in bringing a community together.”

Being named one of our top sales consultants is based on a number of factors. Melanie was praised for her first-class customer service supporting customers through their buying journey as well as achieving many business targets not only on Tabley Park but on the many developments she had worked on previously.

“Jake and I have worked together on three developments, and we have a good professional relationship; we are constantly checking the homes at every stage, so if there is anything that’s not quite right it can be nipped in the bud and corrected for the customer,” said Melanie.

“The award is a huge honour and achievement, and it’s as much a privilege to have won it as it is to know I’m doing my job well and supporting customers in buying their dream Redrow home.”

It’s a role made easier by our award-winning properties, and superb locations like that at Tabley Park."

“Tabley Park is a fabulous development, we have got beautiful properties including some bespoke designs we haven’t built before and will be complementary of the Italianate and Georgian Architecture seen locally in Knutsford,” said Melanie.

“And Knutsford is such a lovely area and a great location: the centre has an abundance of good restaurants, bars and shops, and plenty of other amenities including Booths and Waitrose supermarkets, and it’s close to the M6 and M56, and the rail network, so it’s ideal for commuters too.”

Jake added: “When I drive into a Redrow development I feel proud because of how it looks, and never more so than now with Tabley Park.”

Anna Evans-Kerr, our head of sales in the North West said: “Both Jake and Melanie play a vital role at Tabley Park and together they make an incredible team. Their commitment and loyalty to each other and to customers is really appreciated and valued.”

The 36-acre development will include a choice of three, four and five-bedroom homes and bungalows from our award winning Heritage Collection, with current availability starting from £801,995 for the four-bedroom detached Marthall house style; as well as allotments, a community orchard, children’s play areas and more than 15 acres of open space.

For more details or to arrange an appointment with Melanie and the sales team call 01565 859506, or visit www.redrow.co.uk/tableypark